Sherlock Holmes Card of the Day: The Giant Rat of Sumatra (Wild Card)

The Sherlock Holmes Card of the Day is:
THE GIANT RAT OF SUMATRA
Wild Card 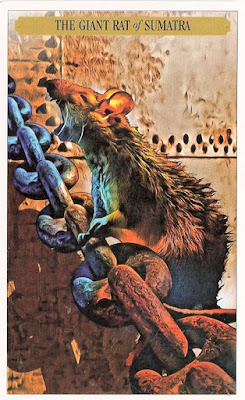 As John Matthews and Wil Kinghan point out in their book The Sherlock Holmes Tarot (Sterling Ethos): “Sherlock Holmes had several cases involving Sumatra, an island in the Dutch West Indies. . . It is the reference to the case of the Giant Rat of Sumatra that gives us the subject of the wild card. This case is never written up by Watson, who declares it to be too horrific to describe. . .” 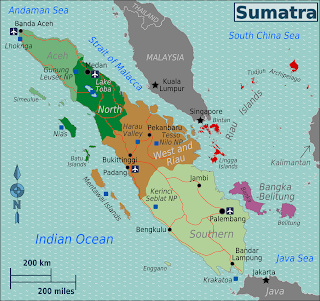 This delightful creature is first mentioned by Arthur Conan Doyle in "The Adventure of the Sussex Vampire". In that story, Holmes says to Watson: “Matilda Briggs was not the name of a young woman, Watson, ... It was a ship which is associated with the giant rat of Sumatra, a story for which the world is not yet prepared.”

Wikipedia has quite a lot of information about the Giant Rat of Sumatra, complete with sources and links to other material: https://en.wikipedia.org/wiki/Giant_Rat_of_Sumatra

You can also find a lot of information about giant rats in general on Wikipedia, if you are so inclined: https://en.wikipedia.org/wiki/Giant_rat

Yikes! So how might we use this wild card? Again quoting Matthews and Kinghan: “The wild card may act as both an independent significator and a means of locating stand-out cards within the deck which you need in order to pursue your enquiries.”

The Giant Rat of Sumatra card has no intrinsic meaning of its own, and therefore can be used in a number of ways. One suggestion provided by the deck’s creators is to shuffle it into the deck and wherever it appears, the card next to it will give the answer. When it appears in a draw, it may indicate that you need to return all the cards to the deck, reshuffle, and draw again.
on Thursday, November 12, 2015