Journey through My Decks: Ace of Stones

For this entry in my Journey through My Decks series I chose to use The Haindl Tarot, created by Hermann Haindl (U.S. Games Systems, Inc.) I was saddened to hear of Haindl's recent death, and decided that this post would serve as my humble homage to his life. 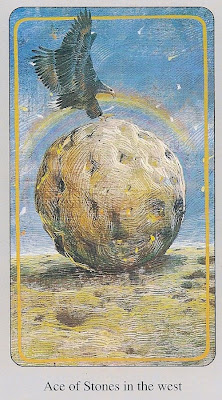 "Hermann Haindl has created a sacred Tarot, one which reaches back to ancient spiritual traditions of many cultures. The Haindl Tarot ... opens our minds. It leads us to see the world in a new way (or perhaps a very old way), as a vessel filled with spiritual power and truth." ~ Rachel Pollack ~

My study of this complex deck is ongoing, aided by Rachel Pollack's two volumes of commentary. My goal here is simply to provide what insights I have been able to gather on this card to date.

Stones in general deal with work and nature. Indeed, the Stone is the only suit symbol in the deck that comes from nature (Wands, Cups, and Swords are made by human beings). Associated with the element Earth, the suit of Stones is considered "feminine" yet Pollack tells us that Stones (along with Swords) have a "dark" or "yang" quality (as opposed to Cups and Wands, which are seen as "light" or "yin.")

In her Introduction to her book on the Minor Arcana of The Haindl Tarot (Newcastle Publishing, Inc.), Rachel Pollack notes that in many Tarot decks, the Minors refer to aspects of everyday life. The Haindl deck follows this pattern, but the Minor Arcana cards are also considered "communal." We are looking at the realm of daily life, work, money, and the physical world on a large scale. The suit of Stones teaches us how to create a new foundation for progress in our lives and encourages us to *work* not just for our own personal reasons but for the restoration of the world.

Let's look at some of the details on Haindl's Ace of Stones (interpretations are by Pollack):
* Eagle: represents God because it dwells in the air and light because it flies up into the Sun; an aspect of Wakan-Tanka, usually translated "Great Spirit"
* Rock: the rock of reality
* Eagle landing on rock: fundamental realms of Earth and Sky joined together
* Bare rock, lack of flowers and trees: intended to emphasize simplicity, show what really matters
* Rainbow: universal symbol of beauty and gifts
* Colored lights flickering: Spirit beings who fill the world

Pollack tells us that the Ace of Stones represents "the good things in life -- health, prosperity, beauty, even good weather." What is important is how the recipient of these "good things" uses them. Reversed, "the gift remains but the person tends not to appreciate it." It can suggest materialism or conflicts about money or prosperity.