REVIEW: Tarot of the Magicians 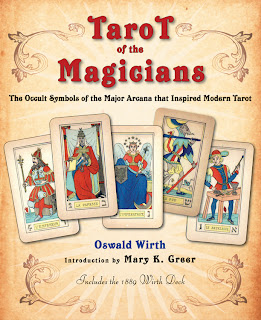 Having recently acquired the Oswald Wirth Tarot (U.S. Games Systems, Inc.), I felt I simply must take a look at the latest reprinting of Wirth's book Tarot of the Magicians. 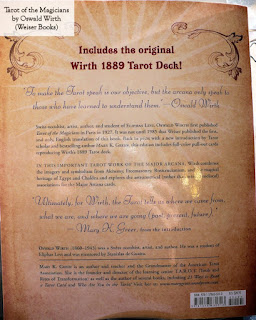 Mary K. Greer's Introduction, written in March 2012, contains a wealth of information for those of us who know next to nothing about Wirth and his deck. Greer suggests that those who are new to the Tarot in general read only certain portions of the book at first, followed by reading the entire book from beginning to end. As a seasoned Tarot reader, I decided to read the book in the order it was written, from start to finish.

It's a lot to absorb, but if you are as keenly interested in the subject as I am, you will devour the pages in very few sittings. I was fascinated by Chapter 8: "The Programme of Initiation as Revealed by the Tarot" in which Wirth explains how each Major represents a stage of initiation. Equally fascinating are "The Tarot Seen in the Light of Hermetic Philosophy" (Chapter 9) and "The Masonic Harmonies in the Tarot."

On many occasions, Wirth's exploration of an individual Major Arcana card triggered an "aha!" moment for me that gave me a deeper understanding and appreciation of that particular card. For example, I was able to relate better to The Pope (Hierophant) after reading these words: "The uprights of the pontifical chair represent. . . the two opposite poles in the sphere of faith: an anxious search for religious truth and confident adherence to the beliefs which are held respectable. . . Keeping the middle way between tradition on the right (rational theology) and the demands of the left (the feelings of pious souls) the Sovereign Pontiff adapts religious knowledge to the needs ot humble believers." 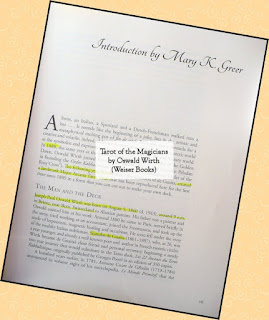 Of The Devil (arcana 15), Wirth writes: "Let us learn how to treat him fairly, not as a systematic and irreconcilable enemy, but as an inferior whose services are precious. Let us not forget that it is the Devil who makes us live in the material sense."

In Chapter 15, "Consulting the Tarot," Wirth suggests a 5-card spread that I took for a spin here at Tarot Notes almost three years ago. Click HERE to read that blog entry.


Tarot of the Magicians is not an "easy read" or a "quick read." I don’t recommend it if you are not the studious type or you don't want to delve into the history, background, and symbolism of Wirth-style decks.

As Mary K. Greer points out in her Introduction to the book: "Most of today's Tarot readers come from a modern perspective that blends Jungian, Neopagan, New Thought, New Age, and earth-centered Eco-Spiritualism with New Physics and a sprinkling of Theosophical concepts in a kind of quasi-pantheistic idea of the immanence of Spirit in all beings and in nature." If you fall into that category, you need to understand that Oswald Wirth did not look at the Tarot that way. As Greer puts it: "The idea was to work with Nature but ultimately transcend it." 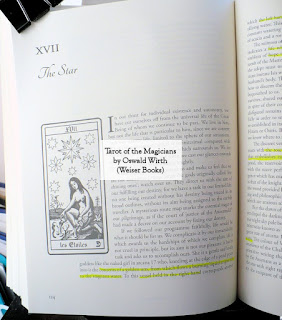 Those who have a thirst for knowledge and insight into "the great occult and metaphysical ideas that coalesced in France in the late 19th and early 20th centuries" (Greer), will take delight in Tarot of the Magicians and refer to it for years to come.

"Tarot of the Magicians by Swiss occultist artist and author Oswald Wirth was first published in Paris in 1927, and a Weiser edition was later released in 1985. The Weiser edition is a direct translation and the first and only English-language edition of this important work.

Long unavailable, the book is back in print in a beautiful new package with full-color pull-out cards reproducing Wirth's 1889 tarot deck. With a new introduction by bestselling tarot author Mary K. Greer, Tarot of the Magicians offers tarot enthusiasts and students of the occult an in-depth and authoritative analysis of one of the most beautiful and evocative of all modern tarot decks." 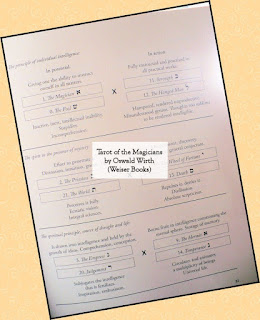 Oswald Wirth (1860-1943) was a Swiss occultist, artist and author. He was a student of Eliphas Levi and was mentored by Stanislas de Guaita.

Mary K. Greer is a Grandmaster of the American Tarot Association and teaches workshops and classes on Tarot and astrology throughout the U.S. and abroad. She is the author of several books, including 21 Ways to Read a Tarot Card and Tarot for Your Self. This book is a revision of Mary Greer’s Tarot Constellations.

In the back of the book, the Major Arcana cards from the 1889 Wirth deck are printed in color on thin cardstock. Pages are perforated for easy removal, but you will need to use scissors or a paper cutter to cut out each card. Cut-out cards will have a solid red back. 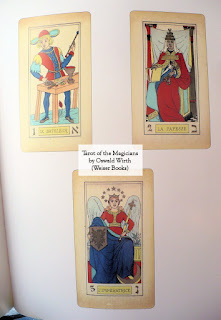 In accordance with the FTC Guidelines for blogging and endorsements, I hereby disclose that this product was provided by the publisher for free. Other than the occasional review copy, I receive no monetary or in-kind compensation for my reviews.  The substance of my reviews is not influenced by whether I do or do not receive a review copy.
on Friday, December 21, 2012