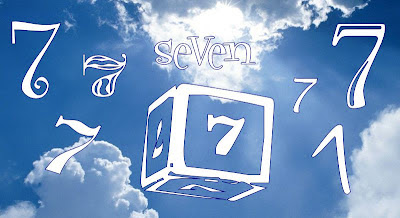 Tarot Cards: The Chariot, Sevens of all suits

I am currently reading a mystery novel by David Skibbins called The Hanged Man (Thomas Dunn Books, an imprint of St. Martin's Press). It's one of a series of books Skibbins wrote, each featuring a specific Major Arcana card. In this particular book, he prefaces groups of chapters with comments about numbers, staring with zero. For Seven, he writes: "The final results of the Great Plan of Creation are far from manifestation. We've got a long way to go. But we get little victories on the path to complete enlightenment. These small triumphs remind us that our struggles are not meaningless but just stepping-stones on the journey. Seven reminds us to celebrate winning the small battles and then get back into the fight."

I like that description. I can see how it applies to the 7 of Pentacles, where a man pauses to appraise what he has accomplished so far, and in the 7 of Swords, where a man carries away five swords, leaving two behind. In a sense, you could say that his task is "incomplete."

The man on the 7 of Wands seems to have the upper hand against his opponents -- but this could easily be a "small battle" that he will need to win as part of a larger "war." On the 7 of Cups, the option that the figure chooses is going to affect how the rest of his journey progresses. On The Chariot (Trump 7) the charioteer guides his vehicle away from a city. He is clearly "on his way" somewhere else, but has not yet arrived.


Writing about the occult meaning of numbers, Paul Foster Case gives the following keywords for Seven: "rest, safety, security, victory. . . temporary cessation." Case also writes, "This number stands for the logical consequence of the ideas symbolized by the numbers preceding it in the series." He points out that the Hebrew name for 7 is Occult Intelligence. (The Tarot: A Key to the Wisdom of the Ages, Macoy Publishing Company) Like Skibbins, Case emphasizes the cumulative effect of efforts.

Gary Meister, CTM offers the key word "Success" and the key phrase "Learning From One=s Mistakes" for the number Seven. He writes: "[Seven] is considered, from antiquity, to be a sacred number. . . Seven indicates that we have learned from whatever mistakes we have made." He adds that the element lined with a particular Seven card will describe the area of life in which we have learned (or have an opportunity to learn) from our mistakes.

Somewhat in contrast to the above, we have those who focus on Seven as a number of mystery, mysticism, and philosophy."

In his book Numerology: Key to the Tarot (Whitford Press), Sandor Konraad gives the Keywords "introspective, secretive, spiritually attuned" for the number Seven.

Quoting from Numerology and The Divine Triangle by Faith Javane and Dusty Bunker (Whitford Press): "Seven seeks answers. It tries to establish a philosophy by which to live and attempts to penetrate the mystery behind its existence . . . Because solitude is necessary for analysis, the 7 feels the need to spend time alone, away from the crowds, in touch with nature. . . 7 ushers into the cycle a physical completion without apparent effort. . . " Key words for Seven: "quiet, introspective, intuitive, analytical inspirational, reclusive, philosophical, mystical."

In Anna Burroughs Cook's Tarot Dynamics system: "Subject Card Seven corresponds to our relationships." This is in keeping with the Seventh House (house of one-to-one relationships and partnerships) in Astrology. Cook writes: "Sevens are all about the constructive or self-defeating manner in which you handle (or allow yourself to be handled) in your personal and professional relationships." 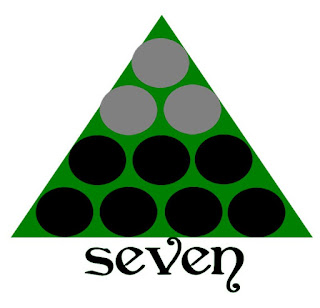 Konraad writes, "[The Fool as The Charioteer]. . . is in full control of his chariot of personality." The black and white sphinx-like creatures suggest a conflict between id and ego impulses now resolved by The Charioteer. The prospect of solitude does not disturb The Charioteer because "he has acquired inner strength and harmony." The Divinatory Meaning provided by Konraad for The Chariot upright is Victory. Reversed: Dark victory. Defeat.

Concerning The Chariot (Card 7), Anna Cook writes that when this card appears: "Your attitude, moods and views, now have a stronger influence upon other people than you may realize. . . Your 'synergy' is about to be tested or rewarded. One or more of your relationships are about to enter a new phase that could open your eyes or broaden your horizons, if you're paying attention!" Cook's key words for The Chariot are "Karmic / Relationships."

According to Javane and Bunker: "The Chariot represents receptivity to the will of the one Source. . . Symbolically, The Charioteer is the soul, directing the chariot, the body."

For Sandor Konraad, in the Minor Arcana, 7 is a number of CHANGE. With Pentacles (Coins), this is likely to represent a change in business or career, "usually for the better" or a business trip. The 7 of Wands suggests a change "concerning a student, teacher, or writer". The 7 of Cups: "Change in residence. A home visit to or from lover, friend, or relative." Konraad views the 7 of Swords as a "Warning card" that indicates that "the person may be on the edge of a breakdown." It can also be seen as a warning against accident.

We have quite a few interpretations to consider here. At this point in time, my key words for the number Seven: mysticism, evolving/extending, pulling back/pushing ahead, solitude/contemplation, complexity, and wisdom gained from experience.

I hope you enjoy these quotations I found that include the number Seven:


“All human actions have one or more of these seven causes: chance, nature, compulsions, habit, reason, passion and desire.” ~ Aristotle (Ancient Greek Philosopher, Scientist and Physician, 384 BC-322 BC)

"One man in his time plays many parts, his acts being seven ages." ~ William Shakespeare (English dramatist, 1564-1616)

"The serpent, the king, the tiger, the stinging wasp, the small child, the dog owned by other people, and the fool: these seven ought not to be awakened from sleep." ~ Chanakya (Indian Politician, 350 BC-275 BC)