Me, An Enemy, A Friend, An Opportunity

Today on Tarot Notes, I'm introducing a reading that could be used daily, weekly, monthly, or whenever you like. For this reading, I am using the Otherworld Tarot by Alison Williams, with artwork by Sarah Nowell (Schiffer).

Today I am aware of choices, especially at an emotional level. What is most likely to bring happiness and fulfillment to me today (this week, this month, etc.)? I need to make a choice and direct my time and attention accordingly.

My enemy is any tendency to suppress creative inspiration or allow burdens to block creative energy.

(3) A Friend: SEVEN OF SWORDS (Underhandedness)

My friend is an ability to recognize that the motives and tactics I need to employ may have to be kept under wraps and may not be what I would normally feel comfortable using. On the other hand, I may become aware that someone else is keeping secrets and seeking to undermine me or bring me strife in an underhanded way.

(4) An opportunity: THE WHEEL OF FORTUNE (Change)

Although I don’t “do politics” at Tarot Notes, I do sometimes explore political situations such as Presidential elections.

For this year’s election, I am going to ask the cards to describe the two candidates and suggest the characteristics of the eventual winner.

I am using the Hudes Tarot by Susan Hudes (U.S. Games Systems, Inc.) For this reading, I am separating the deck into (1) Major Arcana, (2) Court Cards, and (3) Minor Arcana to supply answers for each candidate. I will then shuffle the cards all together again to draw a card to represent (4) “The Winner.”

I am not designating which candidate is #1 or #2. We will each need to deduce that from the cards that are drawn. 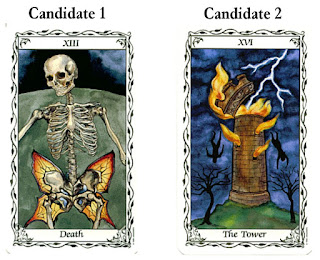 The over-arching energy at work in this candidate is the energy of the zodiac sign Scorpio. Astrologers typically associate Scorpio with an intense energy that incorporates tendencies to be jealous, secretive, vindictive, ambitious, stubborn, violent, curious, determined, controlling, and passionate. Scorpio has a powerful and demanding presence. The Death card usually points to ending a way of being or stage of life in order to start a new way or stage. Its energy is about change that is deeply felt and enacted. The hope of rebirth is inherent in the meaning of this card.

Over-arching Energy at Work in Candidate 2: THE TOWER

Like Death, The Tower is typically about change – dramatic change. It symbolizes release from a prison that we ourselves have created by severing the connection between intellect, emotions, and intuition. This energy is not smooth or peaceful. Associated with the planet Mars, it involves lightning and fire. Often when things have come to a difficult stage, it takes the explosion of The Tower to illuminate a reality we may have been reluctant to see. With The Tower, we must face difficult truths. 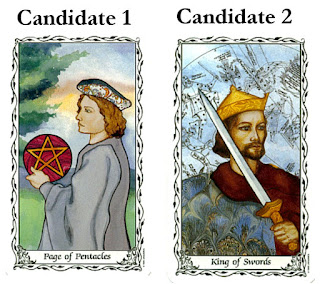 The Page of Pentacles often represents a focus on the physical, material world (Earth). Pages can refer to youth or a youthful spirit, but can also suggest immaturity, childishness, or naivety (a lack of wisdom or experience). Being a novice at something isn’t, in itself, a bad thing. However, it can be a problem if the person who is a novice tries to be something or someone he just isn’t ready or qualified to be.

Kings as a group are seen to represent maturity, wisdom, authority, and intelligence. The suit of Swords is the suit of the mind and communication. Interestingly, the book Wisdom in the Cards by A.L. Samul (inspired by the Hudes Tarot deck) compares the King to the President of the United States, in that both have a military component to their role and responsibilities. The King of Swords is known for having foresight and the ability to listen carefully to what others have to say. 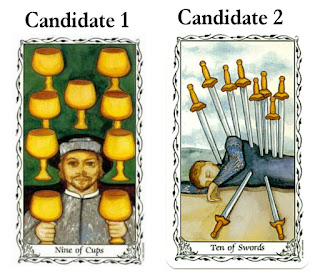 The 9 of Cups is typically viewed as a card of contentment and satisfaction, of needs and desires fulfilled. This suggests that Candidate 1 is prosperous in many ways, rich in relationships and connections to others. He has what he wants and needs and is aware of its value.

The 10 of Swords could be seen as a “bad luck” card, representing defeat, damage, and difficulties. This desperate state requires the help of others to overcome. The number 10 does suggest a turning point, almost as if to say, “This is as bad as it’s going to get. If you can weather this storm, the path ahead is clear.”  But it’s going to get worse before it gets better. 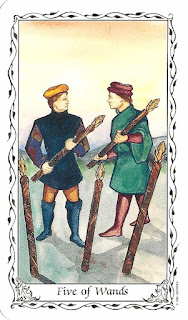 The Winner: FIVE OF WANDS

The winner of this election is most likely to be the candidate who has the most integrity, who is known for honesty and equality in business dealings. This is a person who can negotiate and work through differences, examining all avenues of action. This person looks directly at the one he is communicating with and has nothing hidden behind his back. He places himself on equal footing with those who oppose or disagree with him, and is prepared to seek a fair outcome.

I would love to hear your thoughts on which candidate you think the cards are pointing to.