Sherlock Holmes Card of the Day: 6 of Evidence

The Sherlock Holmes Card of the Day is:
SIX OF EVIDENCE
(6 of Wands) 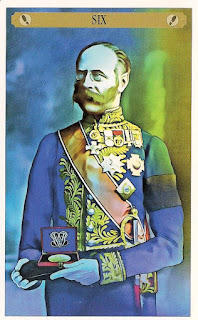 The Holmesian Wisdom for the 6 of Evidence is: “What one man can invent another can discover.” This quote is from “The Adventure of the Dancing Men.” In this story, Mr. Hilton Cubitt of Ridling Thorpe Manor in Norfolk visits Sherlock Holmes and gives him a piece of paper with this mysterious sequence of stick figures that look like dancing men.

Holmes often works for (and receives rewards from) Very Important People. On the 6 of Evidence, we see “a high-ranking personage offering a small case containing a gift for Holmes – gracious thanks from His Majesty,” the King of Bohemia (from “A Scandal in Bohemia”).

An example from “The Game” for the 6 of Evidence: “Advancement realized through steady growth. Pride in achievement or promotion. . . Recognition assures your popular status. You share your skills to benefit others.”

Examples from “The Fog”: “Brief rewards. Arrogance shadows your achievements. . . Bathing in reflected glory. Observing the achievements of others to duplicate their success.”
on Monday, February 22, 2016