Week at a Glance: The Empress

For the week of February 3, 2013 I am using the Animals Divine Tarot by Lisa Hunt (Llewellyn Worldwide).


My card is: THE EMPRESS 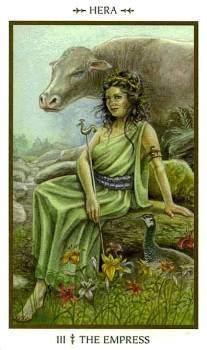 Like last week, a Major Arcana card has come forward, suggesting that I am looking at energy at a "higher" or "deeper" level than usual. The card depicts the Greek goddess Hera, who presided over women, marriage, and childbirth. This is in keeping with the traditional interpretation of The Empress (Trump 3) as representing mothering, nurturing, fertile energy.

Astrologically I link The Empress with the planet Venus. Just for fun, I took a look at Venus transits to my birth chart to see what might be going on there this coming week. As it turns out, Venus is in the sign Aquarius, entering my Fifth House (House of Joy, Creativity, and Self-Expression).