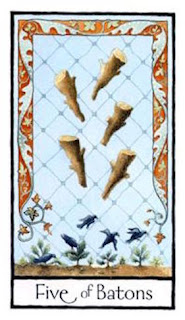 Today I’m looking at the Old English 5 of Batons and comparing it to the more traditional Rider Waite card. The visual we have here is very different to the one more often depicted for the 5 Wands (Batons). When we look at the more traditional Rider Waite, we can see from the image of the five figures that they are in some sort of struggle. Now this could of course be just competitiveness but also it may well show us some sort of conflict going on. 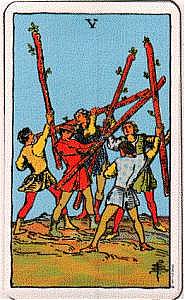 In the Old English we get a completely different image, but it is one that delivers the same sentiment as its more traditional brother and that is competitiveness, struggles and a situation that can be trying and irritating.  What we see growing out of the brown soil is a crop that the farmer has planted and it is being besieged by a murder of crows in competition with each other for the prize of the food. Now no doubt this activity will be very irritating to the farmer and his efforts to protect his crop somewhat trying.

So there we have it, two cards with very different images both delivering the same sort of message, that is one of trying times, or competitive times. It can be telling us of the obstacles that one encounters in everyday life that can be frustrating to deal with but not necessarily that hard to overcome. After all, all the figures in the Rider Waite card need to do is learn to work together and as for the crows, well the farmer needs a really scary scarecrow!