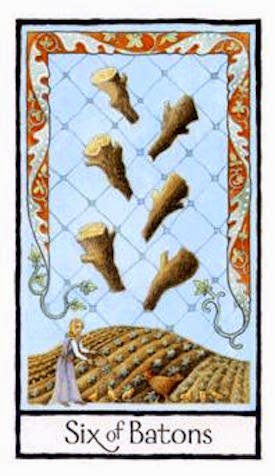 The Six of Batons (Wands in more traditional decks) really does speak to me about progress. This card, like its more traditional counterpart the Rider Waite, also talks of victory, fulfilment along with recognition for past achievements.

In the Rider Waite we see the figure riding his horse and enjoying the acknowledgement for his past achievements. The horse is moving, symbolising that one must keep moving onto the next challenge if they are to remain successful. This whole image reflects the idea of victory and success.

The Old English Tarot’s depiction at first glance doesn’t speak as the Rider Waite one does of victory or the acknowledgement gained, as seen in the laurel wreath the rider wears. But what we do see is a ploughed field that is burgeoning with produce. A woman tosses feed to a hen and her chicks.

So what does this image represent for us that fits in with suit of Batons/Wands and its energy of creative action? The fertile field along with its crop shows the success she has achieved. While the hen and the chicks could represent, in the form of the chicks, the next challenge. This could be the new potential that exists.

Both images show us the need to keep moving, the horse in the Rider Waite and the woman still working in the Old English. Although the Rider Waite card does have a difference, in that its rider on horseback seems to have time to enjoy a moment or two of acclaim. The woman in The Old English suggests to me that there is no time to sit back and enjoy what has already been achieved if the potential of one’s goals is to be reached. For her, the fertile field and its crop is her acknowledgement, but the card does appear to emphasise that one must keep working towards one’s outcome.

This idea of keeping moving fits in very well with the Wands suit, as it is a suit of fire and fire is never standing still, even if it burns in a fireplace. The field with the crops ready to harvest indicates, I feel, that one cycle has now been fulfilled and the hen with the chicks indicate the potential of the next one.

I really like this card’s imagery as it shows us that what has been achieved is worthy of note but that there is always more to achieve.