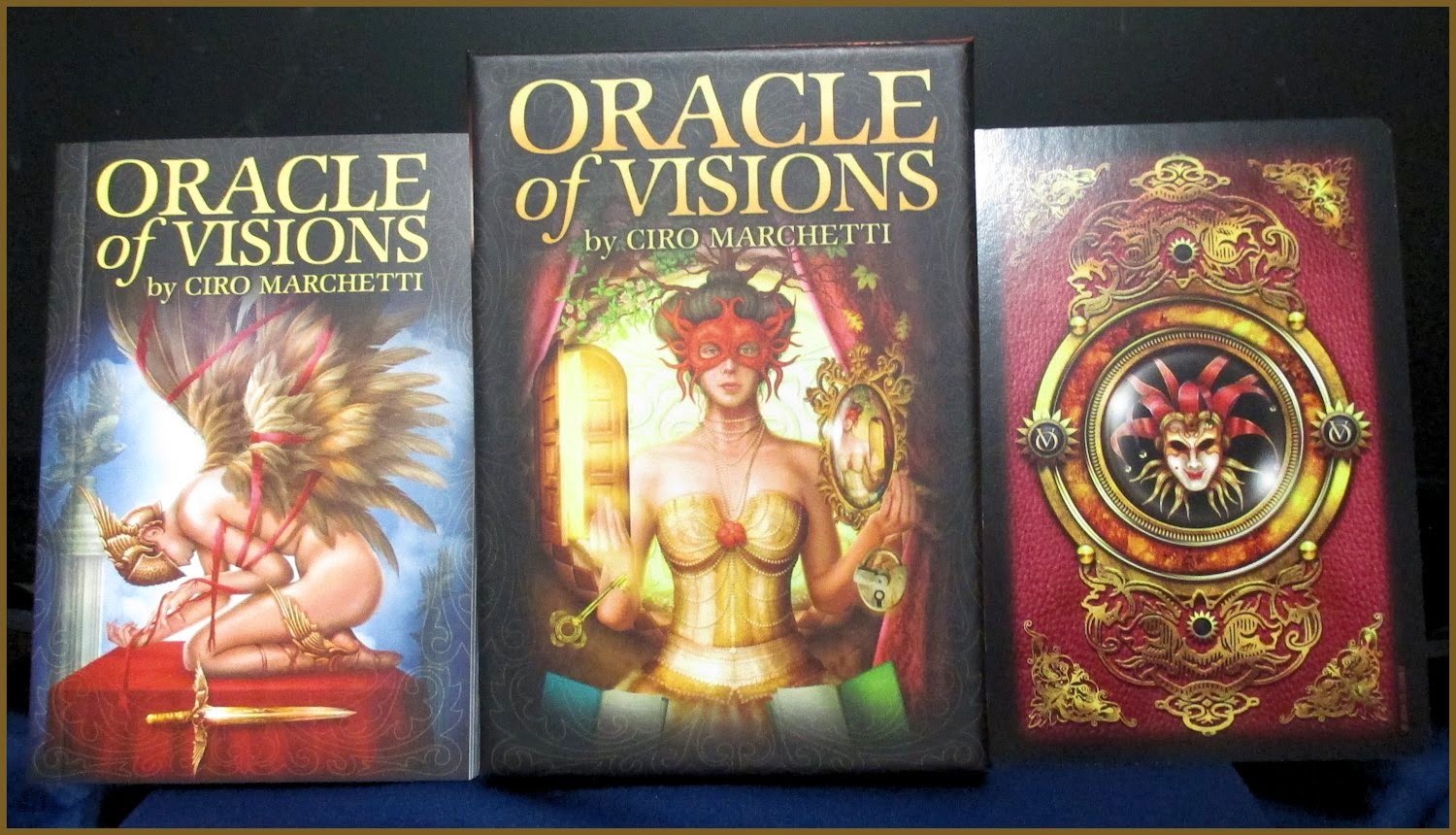 I didn’t need to be “sold” on Ciro Marchetti’s digital art. I have some of his other decks, and I love his style. The images have a 3D effect that draws me in, and the people’s faces are so expressive. There is a sense of realism in the midst of imaginative, even bizarre, settings or surroundings. As in other Marchetti decks, each card in this deck incorporates enough detail to allow me to study and discover and respond – yet not so much detail that the pictures feel cluttered or overwhelming.

I also like the paperback book that accompanies this deck. The quotations used for the cards are alternately thought-provoking, uplifting, amusing, and sobering. Ciro’s commentary on each card offers even more food for thought, encouraging me to explore my own ideas and feelings about his words.

Upon opening the box, I browsed the cards and pulled out three that immediately and strongly resonated with me. I then consulted the book to see the keywords. I was not surprised by the results:


Card 14: Creativity, Imagination
Quotation: “Each day is a new canvas to paint upon. Make sure your picture is full of life and happiness, and at the end of the day you don’t look at it and wish you had painted something different.” ~ Ritu Ghatourey

Card 34: Breaking Free, Chasing a Dream
Quotation: “A horse is the projection of peoples’ dreams about themselves – strong, powerful, beautiful – and it has the capability of giving us escape from our mundane existence.” ~ Pam Brown

Oracle of Visions is a great choice for all Ciro Marchetti fans and for people who are looking for a non-Tarot divination and meditation deck that inspires, challenges, intrigues, and delights.

“Through lush, Victorian-influenced images, the Oracle of Visions deck offers unique perspectives for insightful and intuitive readings. Rather than relying on a single theme, this eclectic oracle deck introduces archetypal figures from many areas of life, including the theater and the carnival. Ciro Marchetti’s imaginative scenes encourage us to set aside pre-conceived ideas and open ourselves up to new ways of looking at our choices, decisions, and potential outcomes.  Oracle of Visions set includes 52 cards and 140-page illustrated guidebook.” 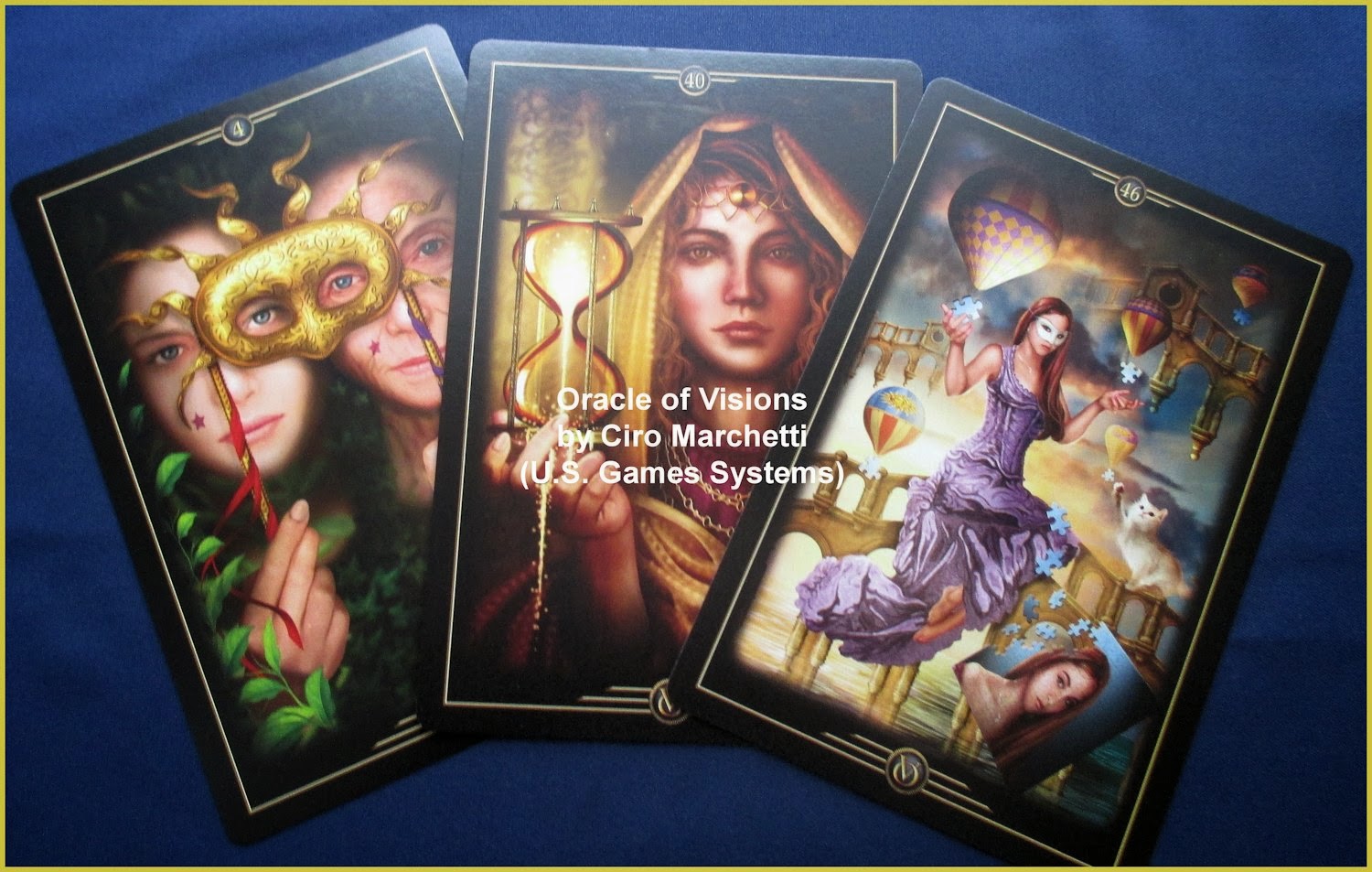 With Oracle of Visions, Ciro Marchetti casts off the restrictions of structure and format imposed by Tarot in favor of “a far more flexible opportunity to create a worthwhile tool for divination and meditation.” His intention was “to create a set of images that would speak for themselves and require no supporting text in communicating their possible meanings.” He wanted the images to be, for the most part, neutral, without any particular “spin” or standard interpretation. Ciro writes: “If there is a common thread, it’s that they mostly deal with the theme of choice.”

This oracle is loosely broken into four categories: Situations, Emotions, Actions, and Behavior. It is not designed to be used with reversals. Ciro chose not to include keywords or titles on the card faces. The cards are numbered, but Ciro states that there is “no intended significance” on his part as to which numbers were chosen for which cards – except for 21 for Lady Luck.

The 52-card deck is accompanied by a 3.75 x 5.5 paperback book that is about a half inch thick (140 pages). It begins with a Foreword in which Ciro discusses his reasons for creating the deck and his intentions concerning the artwork. For each card we are given a black and white scan, keywords for the card, a short quote, and a short explanation of how the card can be read. For example: 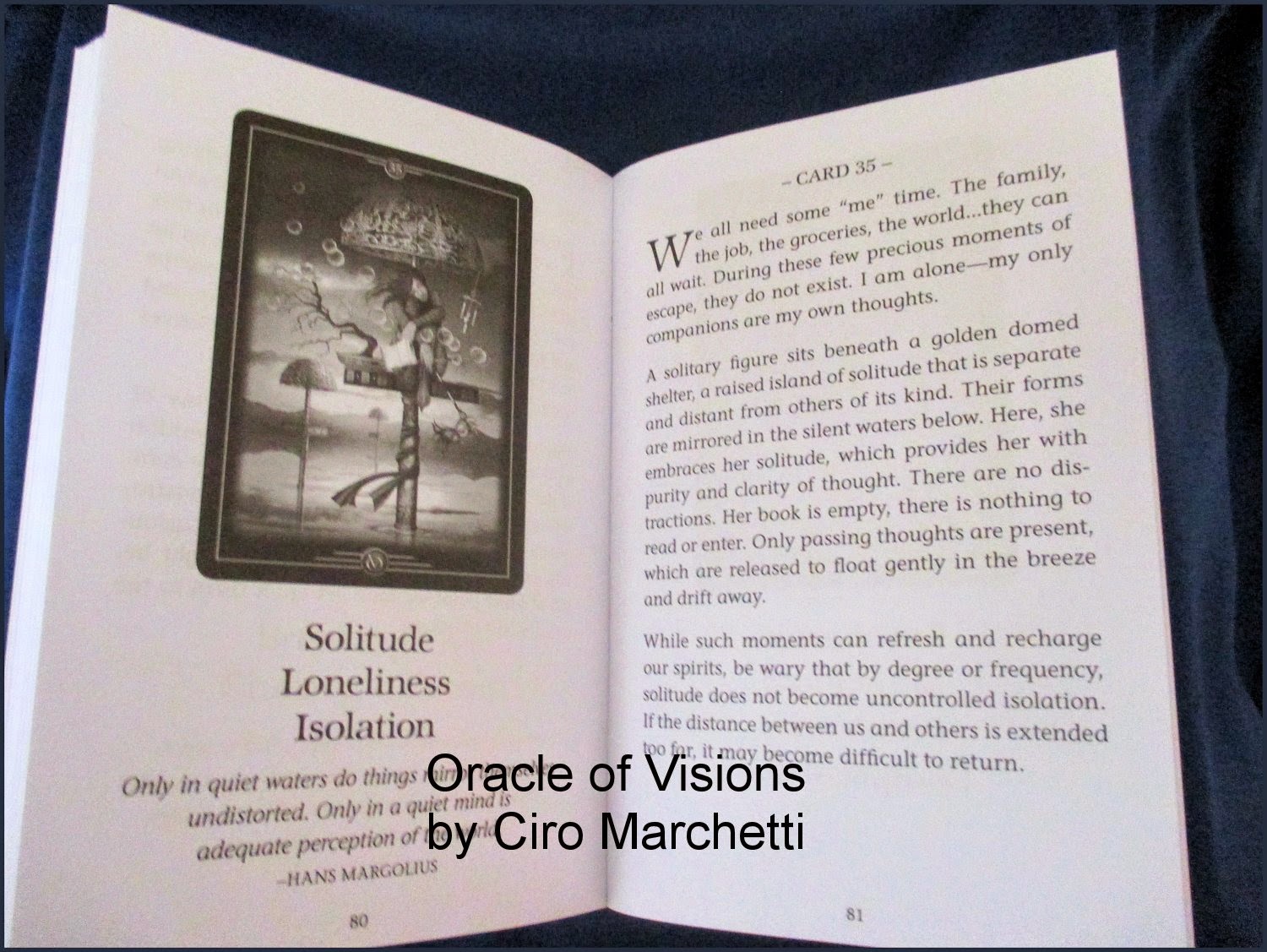 At the end of the book, Ciro provides alternate interpretations for Card 1 to demonstrate the flexibility and freedom he wants readers to have. He also includes an example of how one might interpret a line of six cards by combining their meanings to create one story. This is followed by a section titled Background and the Journey to Here and a final section titled Approach. 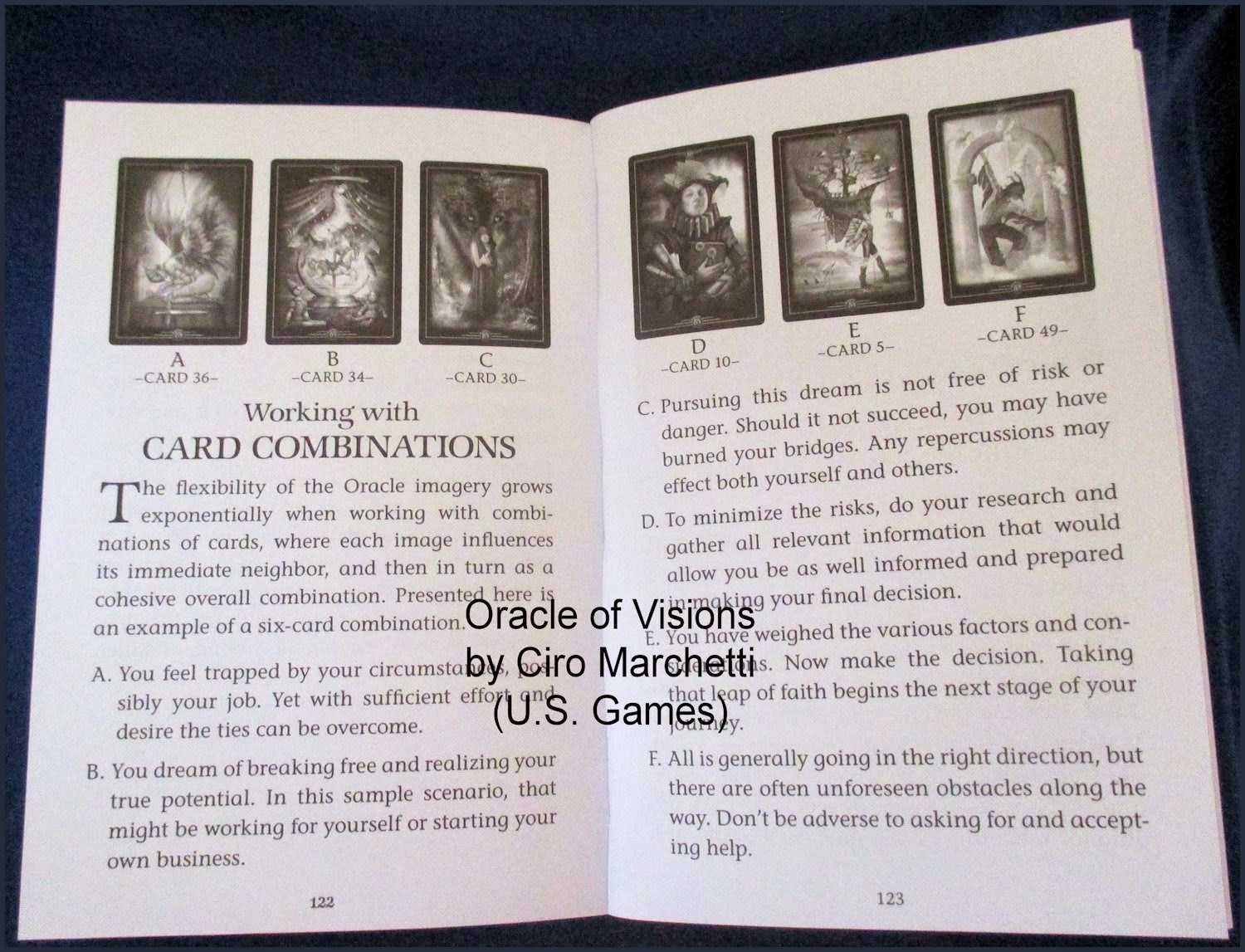 Oracle of Visions is packaged in a sturdy lift-top box with a matte finish featuring the image from Card 26 (Past & Future / Fresh Start). The card stock is durable with what I would call a semi-gloss finish. At 3.75 x 5.5 inches, the cards are easily fanned but not easily shuffled if you have small hands.

The front of each card has a black outer border and fine gold inner border. The card number is centered at the top. Centered at the bottom is a logo created from the letters OV. Card backs have a dark outer border inside which is a gold filigree design on a red background. A jester’s mask floats in the center surrounded by gold rings with the OV logo on either side.

Ciro Marchetti created the Gilded Tarot, Tarot of Dreams, Legacy of the Divine Tarot, and Gilded Reverie Lenormand. He writes that his intention with Oracle of Visions was “to create a set of images that would speak for themselves and require no supporting text in communicating their possible meanings.” He also intended that the images “would for the most part be neutral.” 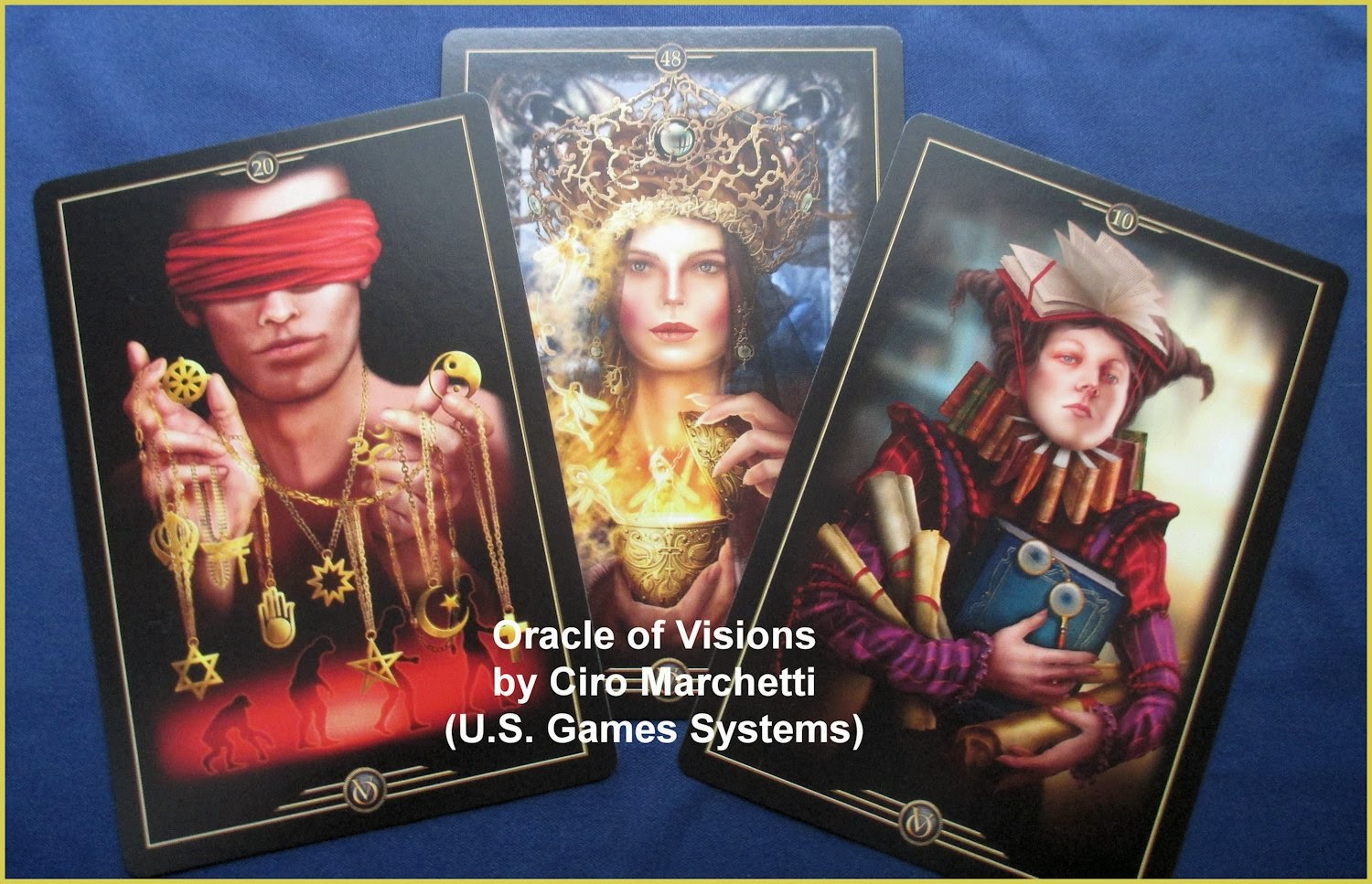 The images on the cards are created with rich jewel tones, using shadow and light to create depth and drama. They incorporate Ciro’s “trademark” jesters, masks, mechanical devices, and faux Victoriana costumes and characters. Ciro explains that the jesters and masks serve as archetypes, the mechanical devices are “metaphors of our partial control in our fate,” and the Victorian feel is “a decorative indulgence that visually aligns with” the “Steampunk” style of the mechanical devices.

Both male and female characters are used. Although the images are for the most part “neutral,” I get a distinctly creepy or negative vibe from some of them and a soothing, positive vibe from others.


---------------------
In accordance with the FTC Guidelines for blogging and endorsements, I hereby disclose that this product was provided by the publisher for free. Other than the occasional review copy, I receive no monetary or in-kind compensation for my reviews.  The substance of my reviews is not influenced by whether I do or do not receive a review copy.