Week at a Glance: King of Swords

For the week of March 31, 2013 I am using the Celtic Dragon Tarot by D.J. Conway and Lisa Hunt (Llewellyn Publications). This is one of my oldest and dearest decks, so I am eager to see which card comes forward for the coming week.


My card is the KING OF SWORDS. 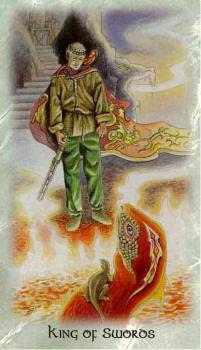 The Guide to the Celtic Dragon Tarot tells us that in this deck, Wands are associated with the element Air, while Swords are associated with the element Fire. Therefore it is no surprise that we see the King of Swords in a cavern that is part of the interior of an active volcano. His sword is said to represent "his strength of will." A large Fire dragon with a baby on its shoulder looks up at him from a pit of molten rock. Having descended into his subconscious mind, the King of Swords now connects with universal power.

Although I realize that Court Cards can represent other people in my life, I know that more often than not, they represent aspects of my own personality that I need to explore, understand, control, or express. In her book The Tarot Court Cards (Destiny Books), Kate Warwick-Smith offers the following characteristics for this king in his various helpful and harmful roles:

In the Celtic Dragon guidebook, D.J. Conway presents the King of Swords as a card of opposition that commands us to "obey the laws." She sees his influence as powerful, stubborn, and masculine.  He delivers the message: "Do everything exactly by the rules or you will lose."

I feel I need to control or limit the less helpful energies represented by this King, while expressing or emphasizing the more helpful energies -- whether these energies come from within myself or from an outside source. Specifically, I think I need to be careful that I do not take a narrow, rigid view of something when a more relaxed, tolerant approach would be better.

I think I am being encouraged to avoid being legalistic in matters, and to be realistic and practical (which may mean bending the rules in a particular situation). Having a "will of iron" can be beneficial in some situations, but this week I may need to moderate or modify that tendency. If someone with King of Swords energy opposes me, I may want to think twice before automatically responding in kind.