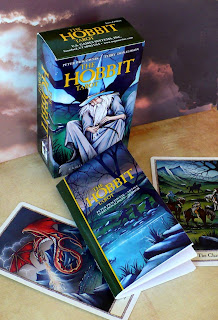 In the Introduction in the booklet accompanying this deck, Terry Donaldson writes, "The beauty -- and genius -- of the Tarot is that as a set of simple pictures it holds universal appeal. . . In bringing together the Tarot and The Hobbit, a kind of marriage has been achieved between these two very distinct mythical realms, and like all unions, this one also has its own contradictions and unities, its own 'personae.'" 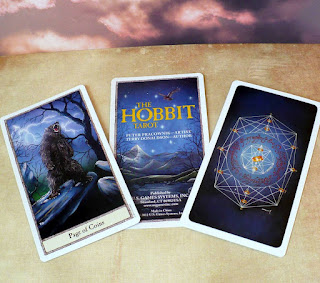 Artist Peter Pracownik held his first exhibition in Los Angeles in 1989. His New Age/Fantasy art has been seen all over the world. In addition to The Hobbit Tarot Deck, Pracownik illustrated the Wyvern card game (U.S. Games Systems), one of the most popular fantasy role playing games in the U.S. and Europe. He also created the artwork for The Lord of the Rings Tarot, the Imperial Dragon Oracle Deck, Ogham: The Celtic Oracle, and the Woodland Wisdom Oracle Cards  (all published by U.S. Games Systems).

Author Terry Donaldson is a professional tarot reader, guide and healer with more than 35 years of experience. In addition to The Hobbit Tarot, Donaldson worked with Pracownik to create The Dragon Tarot and The Lord of the Rings Tarot. He is also the author of several other books on the tarot, magic spells, and folklore.

The Hobbit Tarot is, as you would guess from the name, a theme deck based on J. R. R. Tolkien's book The Hobbit. The cards follow the traditional Rider-Waite organization, with 22 Major Arcana cards and four suits (Wands, Cups, Swords, Coins), with each suit containing four Court Cards (Page, Knight, Queen, King) and ten numbered cards. Strength is Trump VIII, and Justice is Trump XI. 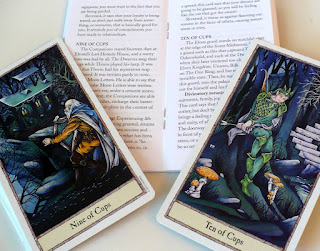 The characters featured on the Majors include Bilbo Baggins on The Fool, Gandalf on The Magician and The Hierophant, The Elf King on The Emperor, Gollum on The Hanged Man and The Moon, and Smaug on The Devil, The Tower, and The World.

The booklet, which is text-only (no illustrations), includes a description of each card and divinatory meanings for upright and reversed cards. Three unique spreads are provided at the end: The Ring of Gollum Spread (12 cards), The Sword of Aragorn Spread (9 cards), and The Arkenstone Spread (14 cards). 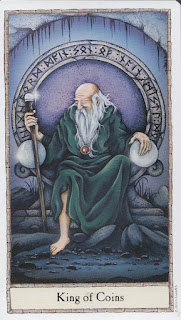 The card backs are reversible with a ¼” white border surrounding a gray/blue inner background. They depict the Ring of Power with the message ”One Ring to rule them all.”

The LWB  (Little White Book) has an attractive color cover.

There are plenty of places online to see Peter Pracownik's fantasy art. The Hobbit Tarot showcases his style nicely, whether he is depicting dwarves, trolls, elves, dragons, humans, or wizards. The coloring is dark and strong, not overly bright or bold. Smaug is a quintessential Pracownik dragon, with his regal bearing and magnificent wings. Gollum is both hideous and pitiful. The wargs are suitably fearsome, and Gandolph is exactly the way I want him to be. 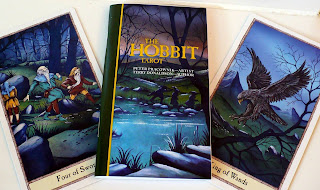 If you are looking for a beginner's tarot deck or if you dislike theme decks in general, this deck isn't for you (unless you are also a huge fan of The Hobbit and would enjoy seeing how the author and artist have blended the characters and scenes from the book with traditional Tarot card meanings). There is certainly are similarities between the journey undertaken by Bilbo Baggins and The Fool's Journey depicted in the Tarot. 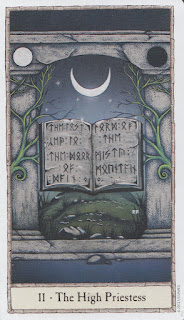 I'm always willing to do readings with theme decks, and often I am very pleased with the results. However, if you prefer decks that the follow strict Rider-Waite symbolism and imagery, you probably won't like this one.

I feel that the booklet does a good job of incorporating the story of The Hobbit into the card interpretations. Naturally, the deck is going to have more meaning for you if you are already familiar with The Hobbit, but even if you aren't, I think the quality and quantity of the information provided by Donaldson will help you enjoy these cards. And you might end up reading The Hobbit to learn more, which isn't a bad thing. I am having fun "reliving" some of my favorite moments from the book as I go through these cards.

At the writing of this review, The Hobbit Tarot is not yet available for purchase, but I understand it will be released very soon!