REVIEW: Tarot of the Mystic Spiral 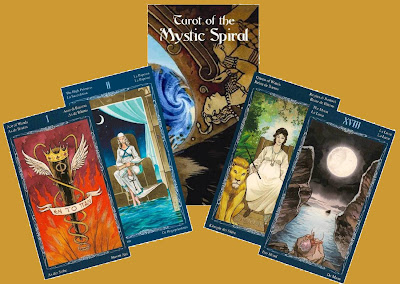 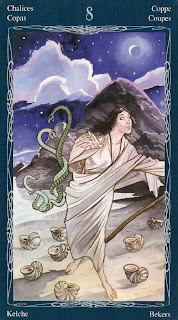 "The everlasting search for knowledge and wisdom is represented by the spiral. It can be found in the galaxies and in DNA, the sacred geometry used in the construction of the pyramids and gothic cathedrals, mathematical constants, alchemist’s formulas, and art dating back to the Stone Age. This mysterious, cosmic symbol is also indicative of a journey, an evolution. Use the Tarot of the Mystic Spiral to help you on your own quest—whether you’re seeking personal growth, spiritual enlightenment, or a glimpse into the ultimate meaning of life."

This boxed deck includes 78 full-color cards and an LWB (Little White Book / instruction booklet). As with all Lo Scarabeo decks, the LWB has sections written in English, Italian, Spanish, French, and German. Too bad they forgot to include Bassa. (I'm just kidding of course. Some folks really dislike the multilingual nature of Lo Scarabeo decks, but I kind of like it, even if it makes the LWB look like it contains way more information than it does.)

This deck is multi-cultural as well, incorporating "Gothic cathedrals...Dervishes and Maori...yogi...Vikings...dragons, unicorns, minotaurs, and sphinxes...Archangels...Knights Templar..." 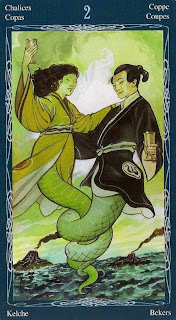 Descriptions in the LWB are unique to this deck and provide helpful information in case you would like to further explore the characters or stories behind the images on the cards. For example, for the Eight of Chalices, we read: "The blind diviner Tiresias is transformed into a woman by the magic of snakes intertwined. Sacrifice and disappointment when faced with condemnation." For the Three of Pentacles we have: "The 'at' (@) sign on the screen of a computer in a fractal galaxy. The expansion of ingenious structures." On the Two of Chalices: "The cosmogonical dance twists the energies of the Shinto gods Izanami-No-Mikoto and Izanagi-No-Mikoto into a double helix. Fecundity arises from the encounter."

I like the way this deck encourages the reader to contemplate the relationship between the "traditional" card meanings and the images/stories chosen for each card. The correspondences are clearly appropriate in many cases.

In the LWB we are given The Oracle of the Hermetic Caduceous, a five-card spread with the following positional definitions: The Winged Wand (the roots of the past, the causes of the present), The Knot (the current issue and its potential development), The Black Snake (adverse conditions, obstacles, and blocks), The White Snake (favourable conditions, allies), and The Helmet of Hermes (summary, the final result). 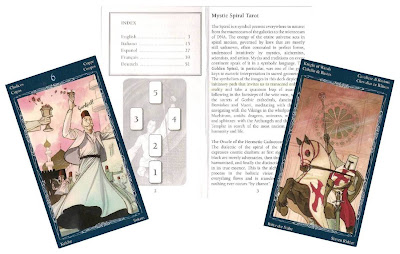 Also in the LWB, each Major Arcana card and each Ace has a Latin phrase assigned to it. For example, The Moon is LUNA MENDAX (the deceitful moon). The Wheel is TERMINUS A QUO, TERMINUS AD QUEM (Starting point, ending point). Temperance is QUANTUM SATIS (just enough). The Ace of Wands is EN TO PAN (All is One). 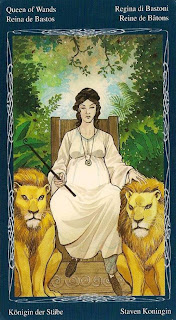 Many of the Minor Arcana cards feature characters whose names are written next to them on the face of the card. For example, on the Six of Wands we see George Gurdjieff dancing with the Dervishes. Pythagoras appears on the Knave of Pentacles. Our Knave of Swords is Archimedes. Although many male characters are thus identified, only one female character has a name next to her: British biophysicist Rosalind Franklin,  who is depicted with Francis Crick and James D. Watson on the Three of Chalices.

To learn more about Giovanni Pelosini, the author of the deck, visit his web site: http://www.giovannipelosini.com/. Google Translate will provide you with an English version if you need it.

The Tarot of the Mystic Spiral cards measure  2 1/2 x 4 3/4 inches, an easy size to handle and shuffle. They are flexible but not too flimsy, and are printed on glossy stock. 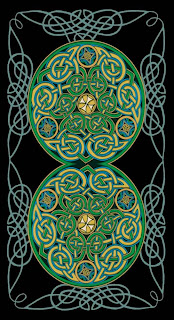 Cards are numbered at the top in blue. The suit name of each card appears in white, in several languages, with English in the upper left corner of each card.

The backs of the cards are dark blue with two circular Celtic-knot style patterns in green, turquoise, and tan. The design incorporates spirals. The backs look the same whether the card is upright or reversed.

Artist Giuseppe Palumbo has worked on various comic books including the well known 'Martin Mystere' series. His art also appears on the Afro-Brazilian Tarot by Alice Santana (Lo Scarabeo). In Tarot of the Mystic Spiral we are again treated to Palumbo's bold, angular (at times bizarre) drawings.

If you were to ask me if I like "comic book style" art, my initial response would be "Not so much." And, indeed, some of the illustrations in the Tarot of the Mystic Spiral turn me off. However, a great many of them appeal to me. As I may have mentioned before, my reaction to the art on a deck is probably the single most important factor in my decision to acquire or not acquire that deck. The images in this deck that put me off are few and far between. 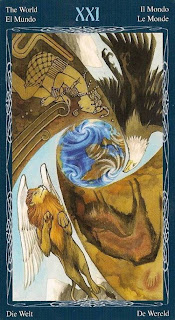 The image from The World card is wrapped around the outside of the box, giving it a sort of "round and round" sensation when you turn the box over and over in your hands.

If you are a Tarot student who is trying to understand the traditional Rider-Waite-Smith symbolism and interpretations, Tarot of the Mystic Spiral is probably not the deck for you. Likewise, if you are a Tarot reader who prefers strict adherence to RWS style, this deck may not work well for you -- although someone who is well versed in the RWS can *see* references and resemblances in this deck.

I find the LWB descriptions, though brief, to be excellent in terms of describing what or who is shown on the card and in giving a clear idea of how the card might be interpreted in a reading.

One could argue that the diverse paths incorporated into this deck give it an inconsistent *feel* that could make it difficult to obtain a cohesive message from a reading. It could also be difficult to intuit what the card represents if you haven't studied the LWB. Whether this bothers me or not will only become evident after I do a few readings with the deck. In the meantime, I remain favorably impressed.

----------------------
In accordance with the FTC Guidelines for blogging and endorsements, I hereby disclose that this product was provided by the publisher for free. Other than the occasional review copy, I receive no monetary or in-kind compensation for my reviews.  The substance of my reviews is not influenced by whether I do or do not receive a review copy.
on Tuesday, January 24, 2012