I continue my astrological exploration of the Major Arcana with Trump 15, The Devil. The use of astrological associations with Tarot is completely up to the reader. This is merely intended to be interesting and fun. 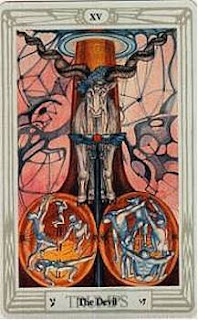 Crowley attributes The Devil card to the zodiac sign Capricorn (a cardinal Earth sign ruled by Saturn), which he describes as "the most exalted of the signs; it is the goat leaping with lust upon the summits of earth." Crowley further states that Capricorn is "rough, harsh, dark, even blind." Book T also associates The Devil card with Capricorn, titling it "The Lord of the Gates of Matter: the Child of the Forces of Time." Crowley tells us that this card "represents creative energy in its most material form." In their book Keywords for the Crowley Tarot, Hajo Banzhaf and Brigitte Theler describe Capricorn as "the sign of the greatest darkness of the year, when the Sun is reborn at the Winter Solstice." (This, of course, ignores parts of the world in which Capricorn is a summer sign!) 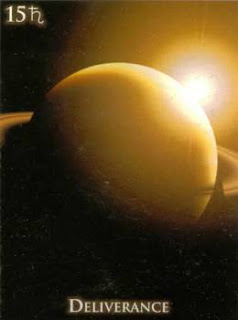 In this deck, Crystal Love titles Trump 15 "Deliverance" and associates it with the planet Saturn. She writes: "Saturn rules the sign of Capricorn. The winter solstice occurs on December 21st, when the solar day is shortest, and night longest." Love notes that Saturn is often identified with Kronos, the Greek god of time (see reference to Book T, above). Saturn's rings symbolize human boundaries. Love writes: "When we are engrossed in the materialism of Saturn, we lose our light and become enslaved to the material world, forgetting our divinity. (It is interesting to note that this card has always been known as The Devil card, the Devil being another name for Satan. Satan is a derivation of the word Saturn.)"

A.E. Thierens, PhD. (Astrology & the Tarot)
Thierens associates Trump 15, The Devil, with the planet Mars, which is exalted in the sign Capricorn. Thierens writes that Mars is the "planet of pain and struggle, passion and sex-nature, but also of the energy necessary for the process of formation and generation in Nature." He adds that Mars "has a special connection with the animal kingdom and animal passion. . . We shall be safe in interpreting this card as energy, desire, lust, war, struggle, difficulties, pain, loss, etc. But also as exercise, training; tests to which the personality will be subject." 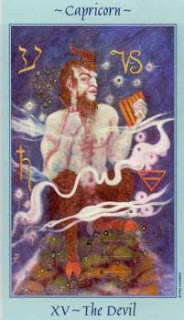 The Celestial Tarot by Brian Clark

Clark titles The Devil card "Capricorn's Instinctual World." The god Pan portrays The Devil in this deck. Clark writes: "No doubt Capricorn is an 'old goat,' as the zodiacal constellation of either a horned goat or a sea goat was recognized as early as the second millennium B.C.E. . . . After centuries of sin projected onto the goat, it became aligned with the Devil, who was depicted with the horns and feet of a goat, similar to Pan." 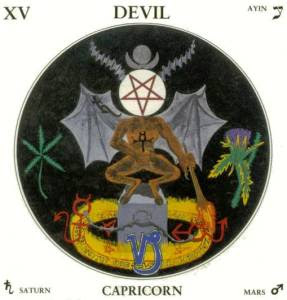 
Mann associates Trump 15, Devil, with the zodiac sign Capricorn. He writes: "Capricorn shows the dominance of worldly power and the difficulties of withstanding temptation. The ruling Saturn is embossed on the wings as the conflict between egocentricity and self-restraint, while Mars exalted is the necessity to resist ambition turning to arrogance. The Devil as the god Pan is temptation and attachment to the delights of the material world of the senses, but the weak chains show the potential to overcome self-inflicted bondage." 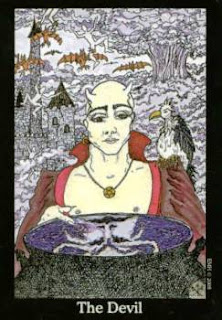 For The Devil, Liz Hazel lists the Golden Dawn attribution of Capricorn but notes "Pluto is also used." Among her divinatory meanings for the card are: "trials and temptations. The use and abuse of power. Corporations and organized religions. Relentless drive to accomplish goals to the exclusion of all else. Hard reality checks that one cannot avoid or ignore." Reversed meanings include: "trapped by prior commitments with little hope of release. Use of excessive force, unrestrained hostility. Without remorse, predatory, a lack of conscience."

Among this group of Tarot writers, astrological attributions for The Devil (Trump 15) center around the zodiac sign Capricorn and its ruling planet, Saturn. Mars, exalted in Capricorn, gets some playing time -- and Pluto (no longer considered a planet by astronomers) gets a nod from Liz Hazel. All of these associations work quite well for me. Did I mention that my ex-husband is a Capricorn? LOL.